(The poem first appeared in Italian in 2000 for the collection Tante rime per bambini published by Mondadori.)

“Balloon” is from Thibaudeau’s 1965 book of concrete poems Lozenges: Poems in the Shapes of Things.

In April 2012, a giant version of “Balloon” was displayed on a billboard near Stanley Street and Wortley Road in London, Ontario. The billboard was a joint project of Poetry London, London Public Library, and Brick Books, in celebration of National Poetry Month.

“Balloon” also appears in
The Wind Has Wings: Poems From Canada (1968, Oxford University Press) and
A Poke In The I — A Collection of Concrete Poems (2001, Candlewick Press).

In this poem, Thibaudeau directs readers to read it in two ways to produce two unique poems:

Written in 1968, “Going Straight Across the Lines then Down Each Column till it’s Finished” was first published in Air 13.14.15 in 1973 and then in The “Patricia” Album and other poems (1992), published by Moonstone Press.

Colleen Thibaudeau alludes to her father’s military service in France (1916-1919) in this note from The “Patricia” Album: “Not being from the Souwesto Region originally, I still see it as “other”. I am not surprised when I read in The London Free Press about “the men from Erieau”, some of whom would have been among those who looked down the lane to Picardy.”

Thibaudeau’s use of free verse forms and concrete poetry came from her French literature studies at university. For example, French symbolist poet Stéphane Mallarmé (1842-1898) described the space around words and groupings of words in a free verse or prose poem as necessary separations that direct the reader’s movement through it, much like “… Music as it is heard at a concert….”:

“Quite a few techniques found [in Music] seem to me to belong to Letters, and so I pick them up. Let the genre become one like the symphony, little by little, beside the personal declamation, leaving ancient verse intact – I venerate it and attribute to it the empire of passion and of dream – while it would be the time to treat, preferably, as it follows naturally, subjects of pure and complex imagination or intellect, not to exclude them from Poetry – the unique source.”
— Stéphane Mallarmé from the Preface to Un coup de dés n’abolira jamais le hazard / Dice Thrown Never Will Annul Chance (1897) [English translation by Mary Ann Caws, 1981].

Inspired by Italian artist Mirella Bentivoglio’s exhibition of visual and concrete poetry by women at the 1978 Venice Biennale, editors Alex Balgiu and Mónica de la Torre have brought together 50 writers and artists from 17 countries to trace women’s use of this form during the period.

The Calligrammes are an idealisation of free verse poetry and typographical precision in an era when typography is reaching a brilliant end to its career, at the dawn of the new means of reproduction that are the cinema and the phonograph. [Apollinaire in a letter to André Billy, 1916] https://en.wikipedia.org/wiki/Calligrammes

Conceived as a small format book, Lozenges: Poems in the Shapes of Things draws on everyday themes and objects from children’s lives – bell, ball, hockey stick, balloon – and invites readers old and young to discover the picture the words make.

‘Going to be one hot summer for sure,’ said Uncle Willie
who had set his heart on growing watermelons
in a cindery patch at the very end of his Garden.

‘No one is going to look there for them.’ He told no one
but us, planted them at night. Joyce and I
biked sweatily out to our first job, tenderly

moved translucent baby cabbages, made little hats
for them, carried water endlessly and longed
for the promised crisp bite, the crisp juices

reviving, ‘turning us into real people’, he said.
We were just at that turning point, thirteen years old;
we dreamed of the watermelon promise.

He said they were ‘coming along nicely’, green
taut, bulging over the hillside, as yet
undiscovered by the boys. September came.

The boys came. One Saturday morning we saw
yellowing leaves only and every watermelon gone.
Yet the anticipation of the melon miracle

seemed to have turned us, Joyce and I, into ‘real people’.
And we pondered this, purposely noisy with our milkshakes,
solacing ourselves with second best.

“Watermelon Summer” is from The Artemesia Book (1991), available from Brick Books.

Long after the Watermelon Summer, Colleen and Joyce remained friends and Joyce grew up to be a talented artist. She once made a “bon voyage” cake (complete with arc de triomphe!) when Colleen left to teach in France.

In this poem, Colleen Thibaudeau recalls a temporary job she had at the University of Toronto library in 1948 and an early encounter with the poet Margaret Avison (1918-2007), who worked at the order desk.

Notes on a Day

Came back from searching dental periodicals
in the Russian translated into German stacks,
Office was feathered over with soft acquisitions
and Our Boss was pondering the Great Seal prior
to attack on new Books. I asked for a change of task.
‘Four o’clock. Not a good time to start fresh.
Try Boston. Try the French …’
Suddenly Margaret, at her desk, looking no different
said, ‘Tether: end of.’ No word more,
passed solitary angel out the gothic door.

Well, yes: Go up: go down. Try Boston. Work to rule.
Came back from searching dental periodicals
in the Russian translated into German stacks.
Our Boss cooed ‘Migraine weather’
put away till tomorrow the Great Seal.
Going home I passed through Chinatown
and bought one of those pink folded-up flowers
that once in water pulses like a throat,
then skipped to ailing Maggie’s doorstep, Whistled
something delightful to the tune of:
‘And particularly delightful is the story of the little old
man who rode all over Moscow free because
no one could change his hundred rouble note.’

An admirer of Avison and her poetry, Thibaudeau began work on her MA thesis on “Recent Canadian Poetry” later that fall. They became further acquainted when Northrop Frye took them out to lunch, and as he notes in his diary, “… I think Margaret & she really took to each other.” [See The Diaries of Northrop Frye 1942-1955, Volume 8, 1949 Mar. 28; this is the lunch Thibaudeau describes in the Biographical Sketch from 1979.]

See also the special issue of Canadian Poetry, Nos. 80-81 for the centenary of Margaret Avison’s birth, where Stan Dragland recalls Margaret and Colleen meeting again in 1973 and Margaret saying ‘I’m going Colleening!’… “Margaret caught [Colleen’s] dynamism in a single word. I’m very glad to have been on the spot to hear that word invented; otherwise, it might never have been spoken. And, speech being so evanescent, it might have been lost… Colleening: The Poetry and Letters of Colleen Thibaudeau is now the title of a play by Adam Corrigan Holowitz, with music by Stephen Holowitz and Oliver Whitehead.” (page 43)

For more about the working milieu of the library order desk from the time described in Thibaudeau’s poem, see Margaret Avison’s I Am Here and Not Not-There: An Autobiography (2009), pages 111-114.

“Notes on a Day” is from The Artemesia Book (1991), available from Brick Books. 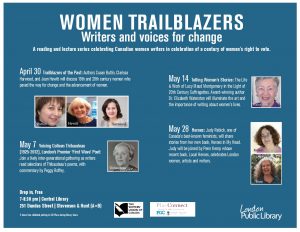 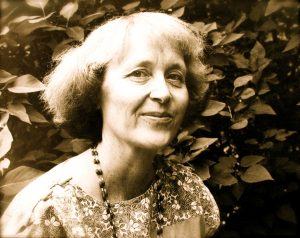 When they pull my clock tower down
I will no longer walk this town.

At night her lucent face is seen
Homely and bright as margarine,

And when I wake when I should sleep
Sounds her Ding Bong sweet
And heart-sticking as the Knife-Man’s cry
When his squeaking cart goes by.

Children, chickens,
Matrons with baskets, old men with sticks, all stop
to gawk at my clock;

The shock-headed with the frost
Kid who sells papers, the popcorn man
Buttery knuckled, the shifter of ashcans,

Firebugs, tire-stealers, track fixers for the TTC,
Somnambulists, commune with me —

And we all move and love
To the grace of her sweet face.

First published in The Canadian Forum (30, July 1950), “The Clock Tower” also appears in The Wind Has Wings: Poems from Canada, an anthology of poems for children published by Oxford University Press in 1968.

Here is Colleen’s poem “Beatie’s Palaces” from The Martha Landscapes (1984), now back in print and available from Brick Books.

“Jeez, you got good leaves.” says Beatie.
Leaves are her luxury; no trees, no leaves on the cinderhill
where she lives by the dump.

Without asking she grabs the rake; she eyes
our corner lot. Beatie is by far the best raker, maker;
her house begins to grow, a rich emerald carpets
every room. “Thirteen rooms maybe,” she says tersely,
“anyways a room for each of you.” Palaces
are what Beatie makes, raking.
And I can still see, squinting through a chink of time,
Beatie’s hands, short-fingered,
(chipped, the polish on her nails, but she’s “allowed”),
her short, strong hands lengthening fiercely into our rake,
small lady of the strangely long arm, she manoeuvers
right round the corner onto East.


“I sure like your leaves,” says Beatie.
Grade Seven will be her last year at school.
She flies around, adjusting the wind-bruised walls;
her red sweater is nubby and too small,
her skirt hitches up, her legs are chapped,
her pushes are energetic:
“In there. In. And don’t come out till I say so.”
We fall separately onto our too-short leaf beds,
try not to annoy Beatie, amazed and proud
she likes our leaves.
What did we dream of there on Beatie’s palace beds?
Infinite luxury, oriental harems… Abruptly,
“All right, you can come out now.”
“What’s for supper?” one of us asks audaciously.
“Macaroni with catsup,” says Beatie positively, “and don’t ask
for seconds, because you’ll get none.”
We look with respect at Beatie, who hands out leafplates
in the big kitchen room. Even the kids taller than Beatie
look with respect and envy at the short, leaf-stained fingers
and the ruby glass ring – (she has privately ‘promised’
it to each of us ‘if we are good’):
Beatie doesn’t shift her ring around, finger to finger,
about thirteen, she is already married to life.

We got called in to supper
to do homework
to practise
to get our hair washed.
Beatie didn’t go home till it got good and dark.
Beatie didn’t have to.
She raked by streetlight with a harp sound attached to the long arm,
We missed it when it stopped,
for it had gotten into our blood, the idea of Beatie raking, making.
From the window (a last look before the wind scatters),
there is Beatie’s palace glowing gold and green.

Inwhich I Put On My Mother’s Old Thé Dansant Dress

“Yes,” said Janos, “you can put on a costume!”
So I go for a favourite, my mother’s old thé dansant dress
(black georgette and hand-made lace). When I was a child
I looked through snowy windows, seeing her leave
for “Tea For Two.” Leaves whirled, the hem dragged
in the mud when granddaughters sortied out for Hallowe’en;
and then I rescued, laundered, aired, and pressed
(black georgette and hand-made lace). Now it’s a humid Sunday
in the scorching summer of ’88. Jamie retreats to the doorway.
Janos, taking the photos, says, “Nearly done now.”
I think, my whole life-span is in this dress.
And, as I strew these words,
rose petals are falling from the matching hat she made.